For three years, the Flag Rock Recreation Area had hoped to get a hard working AmeriCorps NCCC team to come and work on the planned 1.4 mile Magnolia Trail. A few weeks ago, they got their wish when a team of nine NCCC members was recently deployed to their site for three and a half weeks. The team assisted with the construction of a dirt track that snakes through the thousand-acre park. Norton Trails Coordinator Shayne Fields says the team built about 3,715 of the 4,700 feet of the trail constructed!

The team arrived in Norton on October 26th. They had just spent more than two months providing flood relief in  Louisiana. Team leader Alex Tubridy, a 23-year-old native of Buffalo, NY, joined AmeriCorps in June. He says, “Really the whole reason for taking a year off to serve others is really because I want to feel more immersed in different communities that exist within the U.S.,” adding “I know different regions have different outlooks on a lot of different things (and) there are different challenges an area might be facing, different aspects of a community that I might be unaware of . . . I’m really enjoying being able to talk to citizens and just be able to give myself to them."

Fellow team members Sadie Scott, 18, Julia Metz, 22, and Joseph Knoblauch, 18, also found AmeriCorps as they contemplated their next steps following high school and college. Knoblauch explained there were more reasons why he believed he should join the program than excuses for not doing so. “You get to help people and know you’re doing good for others.” The program has also allowed the Minnesotan to become certified as a wildland firefighter. Metz, a Chicago native, said AmeriCorps has also provided her more time to decide her next path. She’s been contemplating law school, graduate school or finding a job. “While being here I’ve realized how my past education really ties into the work that we’ve been doing, as well as what I want to do,” she said.

The City of Norton celebrated the team’s efforts on its final work day by erecting a sign at the Magnolia Trail celebrating members’ work and by serving lunch and offering free bike rides on the trails. The next stop for the team is Vicksburg National Military Park in Mississippi.

For more information on the AmeriCorps team’s visit and work, visit  http://www.nortonva.gov/CivicMedia?CID=Flag-Rock-Area-Trails-13. 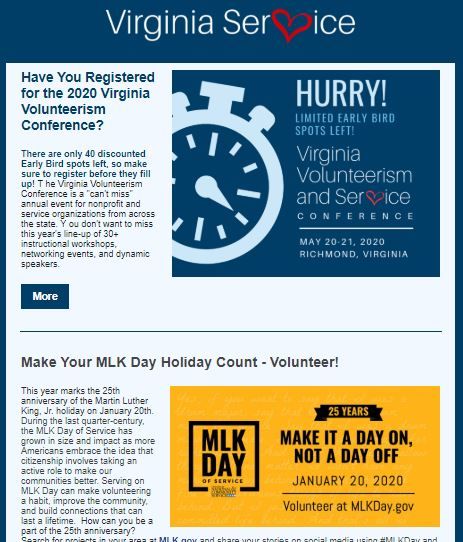 Do your staff & volunteers make home visits as part of their work/service? Check out the Guide on Home Visitor Safetyfor info on safety procedures, hazards, principles of communication etc. https://t.co/gG8sXboYXT https://t.co/SViq0b8Crx