Virginia's Elsa Vasquez-Flores of Alexandria has been named the 2017 AmeriCorps Alums Eli Segal Leadership Award winner!  The award is named inhonor of Eli Segal – known as the “father of AmeriCorps” and the first CEO of Corporation for National and Community Service. The award recognizes emerging leaders who demonstrate strong collaboration and leadership potential during their AmeriCorps service and a commitment to equity and an impact career. In addition, awardees are also named Segal Fellows as part of a strategic partnership with the Eli J. and Phyllis N. Segal Citizen Leadership Program at Brandeis University.

Executive Director of AmeriCorps Alums Ben Duda shared, “Elsa is a committed emerging leader with deep experiences serving young people and their families in her AmeriCorps roles.  She’s made a powerful impression in the communities she’s serving and with her colleagues and mentors.  We’re thrilled to invest in her continued leadership development and expand opportunities for emerging leaders in the Alums network towards advancing equity and impact.”

Elsa is an alumna of Aspire! Afterschool – an AmeriCorps program in Arlington, VA, where she currently works as a site coordinator.   Elsa is committed to serving the young people in her program, as well as building deep relationships with their parents and others in the community.  Her biggest point of pride is when her students say, “I want to be the next Ms. Elsa when I grow up,” and serve in an AmeriCorps program – something that was echoed by her co-workers.  Elsa previously served as an appointed Board Member on the Governor of Virginia’s Advisory Board on Service and Volunteerism, and is a 2014 graduate of Mary Baldwin University.

The Segal Citizen Leadership Program will engage Elsa in a network of 100 Segal Fellows and hundreds of partners spread across the country and the globe, who are focused on fostering the next generation of citizen leaders.  During their first year, Fellows participate in leadership and professional development programming and are matched with near-peer and advanced career mentors.  They stay engaged as lifelong Segal Fellows through both virtual and in-person training, networking, and leadership opportunities throughout their careers.  Program Director, Susanna Flug-Silva, who also served on the selection committee, adds, “Elsa distinguished herself with her commitment to social justice and community engagement and to bridging the gap between education systems and families, especially low income families.  The impact she has had and the growth she has experienced through her service speaks to the power of AmeriCorps and of citizen leaders.  We are eager to welcome her into our community of Segal Fellows and Founders to learn with and from her and to support her growth and goals.”

The Segal Citizen Leadership Program engages emerging leaders from Brandeis University and its national-service-focused partners and provides mentorship, cross-sector professional development, a citizen leadership curriculum, and inter-generational networking as a part of a lifelong Segal Fellowship.

Do your staff & volunteers make home visits as part of their work/service? Check out the Guide on Home Visitor Safetyfor info on safety procedures, hazards, principles of communication etc. https://t.co/gG8sXboYXT https://t.co/SViq0b8Crx 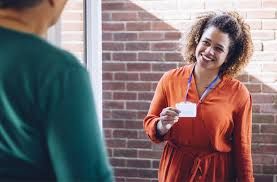